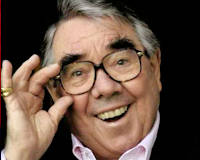 This is where comedy legend Ronnie Corbett lived.

Description: This is where British comedy legend Ronnie Corbett (1930-2016) lived between 1970 to 2003. Ronnie and wife Anne lived in the stunning seven bedroom property named Fairways because it backs onto Addington Golf Club, one of Ronnie's great loves.

The entertainer's first honour came in 1978 when he was made an OBE with his comedy partner Ronnie Barker, household favourites for their long-running sketch shows The Two Ronnies. Corbett starred in his own sitcom, Sorry, hosted the gameshow Small Talk, and also stood in for Bruce Forsyth on Strictly Come Dancing. Corbett was then made a CBE in 2012.

They both Were involved locally too supporting causes such as Croydon Carers Week and the campaign to save the David Lean Cinema.

They reportedly sold the property in 2003 to help his children avoid having to pay for the inheritance tax bill.