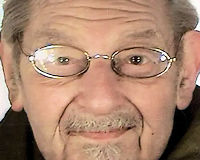 The home of murdered author and photographer Allan Chappelow.

Description: Allan Chappelow had lived in this historic and potentially beautiful house in Hampstead which his family had owned since his childhood.

The 86-year-old was found by police after his bank alerted them to strange withdrawals from his account in May 2006. They found his body beaten to death beneath mountains of paper, curled up, partially burnt and covered in wax. He had been dead for a month.

The award-winning and eccentric writer and photographer for the Daily Mail and Daily Telegraph, had authored books on George Bernard Shaw.

A neighbour, Wang Yam, a Chinese dissident, whose grandfather had been Mao's third in command, was convicted at trial.