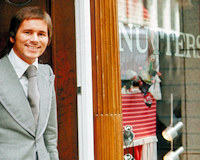 This is where Tommy Nutter's first shop wowed the Beatles.

Description: On Valentine's Day 1969, Roy Chittleborough, Joseph Morgan, Edward Sexton and Tommy Nutter opened Nutters here claiming it was the first new tailor to the street for over a century.

Tommy's extrovert, iconic style (Neo-Edwardian Dandyism in his biography) suited the stars of the day - he brought a pioneering rock and roll energy and lifestyle to Savile Row. They were bankrolled by Cilla Black and her husband Bobby Willis, Peter Brown, and James Vallance-White.

Tommy Nutter branched out into ready-to-wear clothing through Austin Reed and was bought out by Sexton in 1976. In 1981, Roy and Joseph established their own bespoke tailoring firm Chittleborough & Morgan on Savile Row.

Sexton continued to run Nutters of Savile Row until 1983, when Nutter returned with a ready to wear shop at number 19: 'Tommy Nutter, Savile Row'. In 1989's iconic Batman film Tommy Nutter created the clothing of The Joker worn by Jack Nicholson.