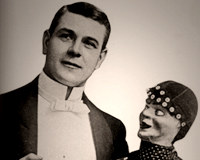 Description: The Father of Modern Ventriloquism, Fred Russell (Thomas Frederick Parnell OBE) lived here in Kenilworth Court in Putney, London, from 1914 to 1926 and is widely credited as being the first to use the classic knee-sitting technique.

His act remained hugely popular for several decades, involving prolonged tours of Britain, Australia, New Zealand and South Africa, as well as visits to others including the USA and Sri Lanka.

In 1948 he was awarded an OBE for his long services to entertainment and continued perform late in life, eventually being billed as 'the oldest ventriloquist in the world'.