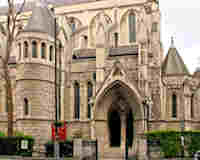 Description: St James' Church is a large English gothic Roman Catholic church with a curious historical connection with Spanish Place, the road opposite the current church.

Shortly after the Roman Catholic Relief Act of 1791 was repealed, a Joseph Bonomi designed chapel was built here on the corner of Spanish Place and Charles Street (now George Street). The project was championed by the Spanish ambassador Thomas Hussey, then a chaplain at the embassy.

In 1827 the official Spanish connection with the chapel ceased and it was handed over to the London Vicariate. To see an example of its Spanish heritage check out Alfonso XIII's personal standard - above the sacristy door.

A requiem mass was held here for the King of Portugal Carlos I on 15th February 1908, and was attended by Edward VII and Queen Alexandra - the first Catholic mass attended by a British monarch since James II.

An unofficial association with the Embassy of Spain continues to this day.

The church is grade II* listed with Historic England.