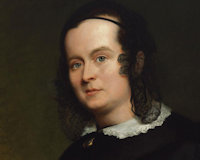 The Emigrants Friend lived and worked selflessly from here.

Description: Caroline Chisholm, who hailed from Northampton, was a 19th-century English humanitarian renowned for her involvement with female immigrant welfare in Australia.

She gave evidence before two House of Lords select committees and gained support for some of her initiatives, including free passage to Australia for the wives and children of former convicts. She also got passage for the children that, through necessity, emigrants had left behind in England.

In 1849, with the support of Lord Shaftesbury, Sir Sidney Herbert and Wyndham Harding FRS, Chisholm founded the Family Colonisation Loan Society. By 1854 the Society had assisted more than 3000 people to Australia.

Chisholm gave emigration lectures throughout Britain, and toured France and Italy. She is commemorated on the 16th May in the calendar of saints of the Church of England.

The George and Vulture», 1.6km