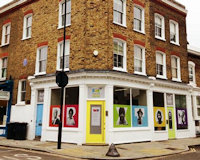 The squat turned project hub for protests against harrassment.

The building was also the site of the Sabarr Bookshop, one of the first black community bookshops, set up by a group of black men and women in Brixton including Morris. The site also hosted a bookshop, cafe, infoshop, library, meeting space, office space, and printing facility.

The site subsequently became an anarchist project, called the 121 Centre, which lasted from 1981 until its final eviction in 1999.

The Siege of Sidney Street», 4.6km