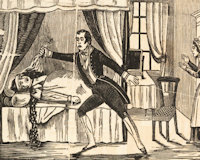 The scene of the murder of Lord Russell in 1840.

Description: This was formerly 14 Norfolk Street (before a renaming in 1880's), although the building, along with others on the east side, has since been demolished.

It is where Franois Benjamin Courvoisier (18161840) began his employment as a valet with Lord William Russell on the 31st March 1840. Russell was a notable member of the British aristocratic Russell family and an experienced Member of Parliament.

After misunderstanding Russell's instructions one day his employer was very unhappy on his return that day and was so upset he asked him to leave his service. That night after the house was to bed, he took a knife and murdered Russell in his sleep. The housemaid found the scene the following morning.

The Swiss-born valet, eventually confessed, and was convicted of murdering his employer Lord William Russell. He was hanged outside Newgate Prison on the 6th July 1840.

A crowd of around 40,000 witnessed his death, including Charles Dickens and William Makepeace Thackeray.