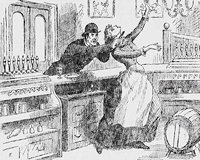 The pub that stood here witnessed a grisly crime.

Description: There used to be a pub here called the King's Arms Wine Vaults, demolished sometime in the mid-20th century. The road was formerly called Frederick Street at the time of the murder.

In days before the opening hours of public houses became restricted, a 21-year-old Welsh barmaid Eliza Davis was found murdered here early on the morning of 9th May 1837. She had lived at the pub for seven or eight years.

Her throat had been cut, and the publican gave the description of a customer who was in the habit of coming in to the premises at about 6am when Eliza would have opened the pub up.

The Pot Boy, Jones, found the scene with a large amount of blood and the police were called for.

The murder investigation was led by Inspector Aggs, but was inconclusive despite lots of possible suspects paraded in front of Mr George Wadley.