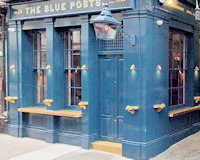 The pub that was attacked by dinosaurs in The Lost World.

Description:
This vintage pub in the heart of soho is still going strong. Apparently the pub was attacked and destroyed by a brontosaurus in the 1925 movie Lost World. The animators on the film used to drink in the pub!

A green plaque was unveiled here at her childhood dance venue here on the 3rd May 1995 by Andrew Lloyd Webber and Ruthie Henshall stating Jessie Matthews OBE 1907-1981 musical comedy star of stage and films was born in Berwick Street.