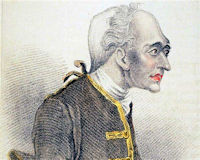 Description: John Elwes (Meggot) (1714-1789) was a Member of Parliament for Berkshire between 1772 and 1784, but is more famous for being an eccentric rich miser and perhaps the inspiration for the character of Ebenezer Scrooge in Charles Dickens' A Christmas Carol.

The politician, who died in 1789 at the age of 75, is thought to have financed buildings that still stand in Piccadilly, Portman Square and Oxford Circus.

When he died he left an incredible sum of more than half a million pounds and he bequeathed three grand houses in Great Marlborough Street to his two illegitimate sons, George and John, George taking Nos. 17 and 19 and John No. 18.

At the time, Mr Elwes was more famous for scrimping and saving, the penny-pinching miser would go to bed as soon as darkness fell to save on candles and ate rotting meat instead of paying for fresh food. His house was full of expensive furniture but also mouldy food - it was said that he once ate a moorhen that a rat had pulled out of a river.

During his 12-year tenure as an MP, Mr Elwes would walk all the way from his Berkshire constituency to the Houses of Parliament claiming just 18p in expenses after being elected. (This was much ridiculed at the time because he would do this in all weather and proceed to sit in his wet clothes rather than get dry clothes). He once badly cut both legs while walking home in the dark, but would only allow the apothecary to treat one, betting with him that the untreated limb would heal first. Elwes won by a fortnight and the doctor had to forfeit his fee!

In later life he began wearing only ragged clothes, including a beggar's cast-off wig he found in a hedge and his clothes became so worn and dirty that many mistook him for a common street beggar, and would put a penny into his hand as they passed.

Dickens, who was born 23 years after Elwes' death, referred to him in letters while writing A Christmas Carol and also mentioned Mr Elwes in Our Mutual Friend. William Harrison Ainsworth is also thought to have created the character of John Scarfe in his novel The Miser's Daughter based on Elwes.