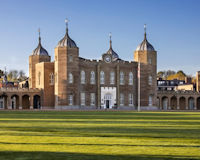 Description: Today this grand set of buildings have been repurposed into apartments and flats called The Academy.

It began in 1741 to produce 'good officers of Artillery and perfect Engineers' and their 'gentlemen cadets' initially ranged in age from 10 to 30.

RMA Woolwich was commonly known as The Shop because its first building was a converted workshop of the Woolwich Arsenal. This is where the common phrase 'talking shop' comes from - meaning 'to discuss subjects not understood by others'.

It's reputed that the name for the cue game 'snooker' (allegedly invented by a former cadet of the Academy) is said to derive from a slang term for newly arrived cadets: the French term 'les neux', which was later corrupted into 'snooks'.