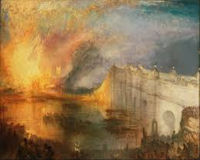 The Painter of Light JMW Turner lived here for 40 years.

Description: The Painter of Light Joseph Mallord William Turner (1775-1851) moved into this house in 1809, and kept it as his home and gallery for the rest of his life (although from 1846 he lived in Cheyne Walk, Chelsea).

He had a gallery on the first floor which used to be a school room and was a large space, measuring he informed his friend Joseph Farington, 20ft by 70ft.

He painted in the drawing room, and sadly the building has been replaced at least twice since he lived in it!

The Portland Estate was built here in 1882 and then they were rebuilt again in 19367 for the Howard de Walden Estate, which has since annexed the adjoining building at 35 Harley
Street.

There is no plaque but there is beautifully carved simple bas relief Turner's head and splendid wording underneath. Look Up, it's below the balcony but above the wide entrance.

Birthplace of the Pre-Raphaelite», 0.7km