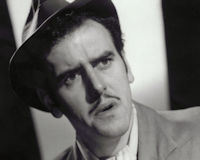 Description: Actor George Cole (1925-2015), was famous for his roles as 'Flash' Harry in the St Trinian's films, Flavius in Cleopatra and the superb wise-cracking Arthur Daley in Minder.

He was born here in 1925 in what was a nursing home, where he was given up for adoption by his 16 year old mother. His adoptive parents Florence and George, took him in at just 10 days old. They moved to Morden 5 years later.

After school at 14 he went to work at Kay's the butchers by Morden station as a delivery boy, he had a newspaper round, and did a weekend milk round. But after answering an advert in a local newspaper he ended up as an understudy in a musical in Blackpool and his stage and screen career took off.