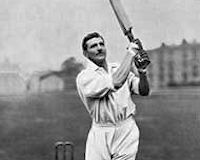 This is where cricket legend CB Fry was born.

Description: Charles Burgess Fry played for England at both cricket and football, played rugby and equalled the world record for the long jump! He played for Southampton FC and appeared in the FA Cup Final in 1902, and went on to write books about sport.

CB represented India at the League of Nations and almost become a Liberal MP in the 1930s. He was also offered the role of King of Albania after the country's German-born royal family departed in the 1920s - but had to turn the offer down because he did not earn 10,000 a year.

Fry had a party trick - he was able to leap from a stationary position on the floor backwards onto a mantelpiece; he would face the mantelpiece, crouch down, take a leap upwards, turn in the air, and bow to the gallery with his feet planted on the shelf! Bravo!

English Heritage unveiled a plaque here in April 2005 attended by his grandson.