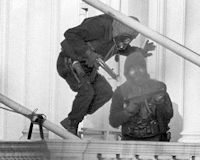 The scene of the Siege of the Iranian Embassy in 1980.

Description: This is where the Iranian Embassy siege took place from 30th April to 5th May 1980, after a group of six armed men stormed the Iranian embassy in South Kensington.

Members of the Iranian-Arab nationalist group the Democratic Revolutionary Front for the Liberation of Arabistan seized the building before being overrun by the SAS.

The embassy was severely damaged during the siege and did not re-open until 1993.

Following an attack on the British Embassy in Iran, the British government expelled all Iranian embassy staff and closed the embassy in protest, alleging government support for the attack.

On 20th February 2014 the Embassy was restored and the two countries agreed to restart diplomatic relations.