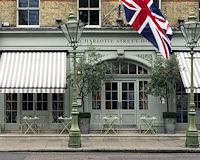 The celebrity hotel which was once upon a time a windmill.

The hotel is on the site of the Percy Chapel, built in 1765 by William Franks and demolished in 1867. Prior to the chapel, this was the site of the famous landmark the Charlotte Street Windmill which also had a natural spring and pond somewhere behind where the hotel is now!

A Disco for the Swinging Sixties», 0.5km