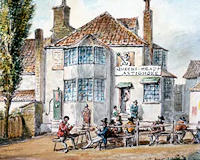 Description: This grand London pub added the artichoke to its name when the sister of Henry VIII, a huge fan of the tasty vegetable, persuaded her gardener to change the name of the pub he owned.

This must have been the original Queens Head pub, dating from the 16th century, which was once a Royal Hunting Lodge in what is now Regent's Park. It is mentioned in the Crew's Survey in 1753 as 'a ramshackle old tavern'.

The licence itself dates from the time Queen Elizabeth Is reign, after whom the pub is named.

When The Regent's Park was created, several Inns were demolished including the Queens Head. It re-located to this spot in 1811 and the name was extended to Queen's Head & Artichoke by 1825, and later by 1876.

The pub was re-built in its present form in 1900, and had the original address of 15 Albany Street in 1861, prior to street renumbering.