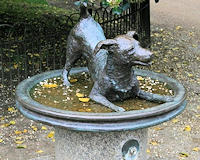 The dog fountain erected in honour of a Shavian actor.

Description: This delightful memorial fountain is close to the Palace Gate entrance to Kensington Gardens, a bronzed terrier awaits someone to play with him.

The fountain is a memorial to London-born actor and producer Esme Percy (1887-1957), who featured in 40 films. He was born in London to French parents, studying acting under Sarah Bernhardt and at the Brussels Conservatoire before making his debut in 1904.

In 1913, he set up his touring company, specialising in Shavian plays - plays by George Bernard Shaw. At the end of World War I, he entertained British troops in Cologne, as Professor Henry Higgins in My Fair Lady with Mrs. Patrick Campbell.

After breaking his nose losing an eye after 'a playful mishap' involving his Great Dane jumping up to lick his face. Subsequently his glass eye, during a 1949 performance of The Lady's Not for Burning, when it popped out and rolled across the floor. From that point on he wore an eye patch.

His greatest role was as Count Aristide Karpathy in 1938's Pygmalion which was written for him by Shaw himself.

Four years after his death, this quaint drinking fountain for dogs was erected in 1961 in his honor, for his love of dogs knew no bounds despite his accident!