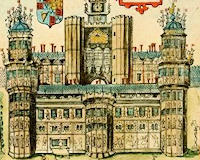 This is where Henry VIIIs great palace used to be.

Description: This is the site of Nonsuch Palace, perhaps the grandest of Henry VIII's building projects. Work started on the 22nd April 1538, the first day of Henry's thirtieth regnal year.

It was built on the site of Cuddington, a church and village that he paid compensation to to vacate the area. The site was chosen because of its proximity to one of favourite hunting grounds.

Within two months the name Nonsuch appeared in documents relating to the accounts for the build, referring that there was no such palace elsewhere equal to it in magnificence (and particularly that of rival Francis I's Chteau de Chambord).

The palace was incomplete when Henry VIII died in 1547 and in 1556 Queen Mary I sold it to Henry FitzAlan, the 19th Earl of Arundel, who finally completed it.

In 1585 the notable Treaty of Nonsuch was signed by Elizabeth I of England and the Dutch Republic here at the palace.

After changing hands several times the palace was handed back to the Crown after the Restoration in 1660 until Charles II gave it to his mistress, Barbara Countess of Castlemaine in 1670. She had it pulled down around 16823 and sold off the building materials to pay gambling debts.

There's not much of a trace of the palace today in Nonsuch Park but some interior pieces are held by the British Museum. There is a notable rise of land where the old Cuddington church used to be.

Nonsuch Palace should not be confused with Nonsuch Mansion, at the east of Nonsuch Park, nor its associated banqueting hall whose foundations are still visible to the south east of the palace site.