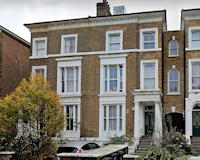 The basement of this house was the scene of the crime.

Description: This house was where 72 year old Forest Gate resident, Jane Rebecca Yorke, was arrested on the 10th July 1944. She said 'I am a Born Medium'.

the last person convicted under the Witchcraft Act of 1735. She operated from the basement here praying on vulnerable women to pretend to conjure or magic the spirits of deceased persons. She held sances here in the front room of her basement where spirits spoke through her Zulu guide. He would utter his war cry of 'Umba, Umba, Umba'!

She claimed that Queen Victoria was a frequent communicant, as was Sherlock Holmes author, Sir Arthur Conan Doyle.

She was found to have preyed upon grieving war widows, and was found guilty at court in 1944 on seven counts by Sir Gerald Dodson, and was fined 5 and bound over to keep the peace and not re-offend, for three years.

The case of this fraudulent medium got a lot of coverage and was the last conviction in England under the Witchcraft Act of 1735. It led to a repeal of that Act, and replacement by the Fraudulent Mediums Act, 1951.

The Children of Capland Street», 8.2km