Murder of Phoebe Hogg and child 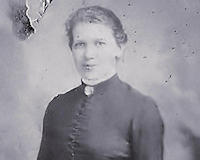 The scene of a brutal and chilling murder of mother and child.

Description: Back on the 24th October 1890, Mrs Phoebe Hogg and baby Tiggy called to visit their family friend Mary Pearcey who lived here. The road was then called Priory Street.

At around 4pm screams were heard and later Phoebe's body was found with severe head injuries in a road in Hampstead. The baby was found later elsewhere on wasteground. Upon investigation Pearcey's flat here was covered with blood up the walls, rugs, ceiling, knives. It appears that she loaded Phoebes body on to the pram (perhaps suffocating the baby) and walked the bloody pram all the way to Hampstead, before offloading the baby much further.

In December 1890, Pearcey was hanged for her gruesome crimes.

Speculation grew after the murder of Pearcey's connections to the Jack the Ripper murders. Could a female serial killer be the Ripper?