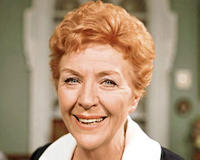 She made history aged just 9 when she took part in John Logie Bairds first ever colour broadcast transmission.

In 1929 she won the top prize in a singing contest at The Ilford Convent. The family moved nearby shortly after and she continued studying there until she was 15.

In 1934 Noel attended the Royal Academy of Dramatic Art (RADA), allowing her to perform everything from Shakespeare to Eliza Doolittle in Pygmalion. It is thought that she added the 'e' to her stage name at this point.

She joined Associated Television in London, where she presented their first ever programme, and throughout the 1950s and 60s she presented and produced at their new Birmingham based service, hosting the first ITV chat show, Tea With Noele Gordon.

She then moved on to present a daily live entertainment show, Lunchbox, a programme which pioneered daytime broadcasts. After more than 2000 episodes Lunchbox came to an end in the summer of 1964 to make way for a new daily soap opera which became Crossroads and which starred Noele as the motel owner Meg Richardson.

She played her iconic role of Meg Mortimer in the long-running British soap opera Crossroads from 1964 to 1983.

In 1973 she appeared on This is your Life and her friend, legendary camp comic Larry Grayson, was the surprise guest. He jokingly proposed on the show and the British public thought it real and the papers took it up so much that they received cards, flowers and more everywhere they went!