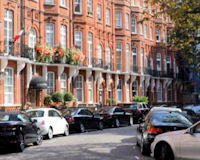 Description: This was the home to British chemist and physicist Sir William Crookes from 1880 to his death in 1919.

Crookes was a pioneer of vacuum tubes and attended the Royal College of Chemistry working on spectroscopy. He invented the Crookes tube in 1875, a fundamental discovery.

He is also credited with discovering the element thallium, announced in 1861, with the help of spectroscopy.

In 1895, he identified the first known sample of helium and in 1913, Crookes invented the 100% ultraviolet blocking sunglass lens.

He carried out all of his later work here, in his private laboratory on the first floor.

It was also here that he became President of the Society for Psychical Research, having first become interested in spiritualism following the death of his younger brother.

He bought the house for 7500 including furnishings from Mr John Batley of Byfleet.

The house, it was claimed in The Life of Sir William Crookes, was the first house in England to be lit by electricity.