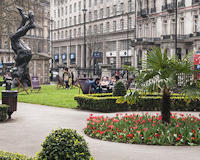 Grovesnor Gardens and their statue to Marshall Foch.

Description: Grosvenor Gardens are two small triangular parks in Belgravia, London, running North-West from Victoria Station. Each is faced on their western and eastern sides by a streets of the same name.

A dominant equestrian statue of Marshall Ferdinand Foch stands in Lower Grosvenor Gardens was unveiled by the Prince of Wales on the 5th June 1930. In August 1918, Foch commanded a series of operations which led to the Germans seeking an armistice in November 1918, and he is largely credited with masterminding the victory over Germany. The sculptor was Georges Malissard and the statue is a replica of another raised in Cassel, France.

The Rifle Brigade War Memorial commemorates the service of the Rifle Brigade in the First and Second World Wars. It stands at the junction of Grosvenor Gardens and Hobart Place, on land donated by the 2nd Duke of Westminster.

Also investigate the shell-covered huts in the lower garden, added in a redesign of the park by Jean Moreux in 1952. The fabrique style buildings are covered with shells from England and Normandy, France. Today they are used to store gardening equipment.

Sutcliffe Park and The Quaggy», 8.0km

The Birdman of Winchmore Hill», 10.km