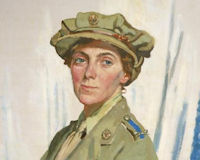 The home of pioneering botanist and female army Commandant.

Helen Gwynne-Vaughan was born into an aristocratic and military family, attending Cheltenham Ladies College in 1895 and became involved in clubs for working girls, developing the conviction that young working-class women would benefit from upper-class leadership.

Helen graduated from King's College in 1904 with an honors degree in Botany and began an academic career in mycology the study of fungi. Five years later she became the Head of the Botany Department at Birkbeck College, London.

She married fellow academic David Thomas Gwynne-Vaughan in 1911 and continued to pursue her career, unlike many married women of her time. His sudden death in 1915 saw her move to this flat close to BirkBeck College. The spacious flat was 'scene of constant business-like activity'. In 1921 she gained her professorship at Birkbeck becoming the college's first ever female professor.

During World War I, she joined the Women's Army Auxiliary Corps (WAAC) and was appointed Chief Controller of a small contingent to be posted in France, and in 1918 was the first woman to wear the insignia of a Military Commander of the Order of the British Empire.

English Heritage unveiled a blue plaque in Gwynne-Vaughan's honour in March 2020, placed on the house on Bedford Avenue in Bloomsbury London, where she lived for nearly 50 years.