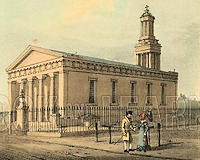 The church where John Major was married.

Excavations started late in 1821, but the foundation stone was laid by Dr Charles Manners-Sutton, Archbishop of Canterbury, on 1st July 1822.

It is thought likely that artist Vincent Van Gogh, who lived in Brixton for about a year in 1873, probably attended the church.

The building was given Listed Building status in 1951.

The Church of the Good Shepherd», 8.1km