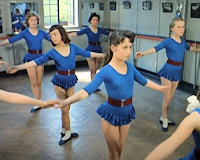 Dance and performance school to the stars.

Description: This is where the Aida Foster Theatre School for drama, dance and education used to be. It was founded by Aida Foster in 1929 as a hobby and became one of Britain's foremost stage schools.

Run by Aida, and later by her daughter Anita, it supplied many child stars for the West End Christmas shows of the 1950s.

Following the death of her husband she closed the school in 1970 to concentrate on their theatrical agency.