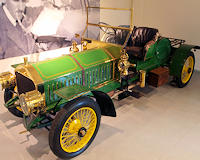 Rolls Royce manufacturing plant between 1903 and 1924.

Description: D. Napier and Son was a British engine and car manufacturer, and one of the most important aircraft engine manufacturers of the 20th century.

They were outgrowing their manufacturing base for motor vehicle production in Lambeth by 1903 and they identified this four acre site. They built a set of new and improved workshops and factories called Acton 1 and a grand office block designed by the architect Robert Thompson. It was impressive for sales too, reputedly having a fine foyer suitable for car display nicknamed Piccadilly Circus.

The site also had facilities for internal combustion engine design, manufacture and testing.