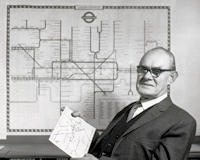 The designer of the first ever Underground map was born here.

Beck was the designer of the iconic London Underground map, first published in 1933. At first it was rejected by Underground management for being too revolutionary.

He spent the first few years of his life living here in the small terraced house, which was then brand new. They then moved to Highgate.

Some 850,000 pocket-sized versions were printed in February 1933, and in March Beck produced the first poster of the map.

Since then, and frequent iterations, the map has influenced the design of many Metro maps across the globe.