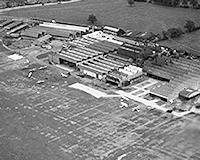 Description: Stag Lane Aerodrome was a private aerodrome operated by the London & Provincial Aviation Company between 1915 and 1933.

They used it for flying training during the First World War but ceased flying in July 1919 after they were refused a license.

The de Havilland Aircraft Company Limited took over in 1920 where they designed and built aircraft here before moving to a larger factory and airfield at Hatfield Aerodrome in 1934.

The last flight from the airfield was a de Havilland Hornet Moth in July 1934.

The eccentric British soldier, mystic, mountaineer and aviator Maurice Wilson (1898-1934) took off from here alone on May 21st 1933 bound for Mount Everest in a Gipsy Moth named Ever-Wrest. It took him 4 weeks to reach India, via Cairo and Bahrain. Despite being banned by Britain, Nepal and Tibet, he reached Everest on foot via a 300 mile journey disguised as a priest, but after several attempts alone, he never returned and his body was found in 1935.

In 1976 the GPO (later British Telecom) opened the world's largest international exchange on the site.

A commemorative plaque was unveiled here on 25th September 2001.

The Aeronaut of Holloway», 18.km