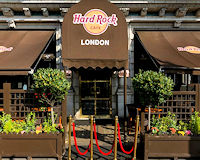 The first place to display the controversial Elgin Marbles.

Description: On this corner where the UK's first Hard Rock Cafe still plies its trade, a controversial and historic event took place.

On a cultural trip to Greece they won the favor of the governor of Athens, his men dismantled a large part of the frieze from the Parthenon as well as numerous capitals and metopes. By 1803, a huge collection of marbles was packed up into about two hundred boxes, and transported to the port of Piraeus. The trip home didnt go well, one ship was sunk and he was kept prisoner in Spain for 3 years. Eventually he got back to London in 1806, and immediately began negotiations to get the Ottoman government to authorize a second shipment of statuary, which left Piraeus in 1809.

He stored them in the garden at the rear in a reportedly damp coal shed, and from 1807, Elgin exhibited the marbles here, becoming an instant sensation, attracting a huge number of artists and academics (such as amazed sculptors including Joseph Nollekins).

In 1816 they were transferred to Burlington House and the British Museum.

The mansion then became the city residence of Prince William Frederick, Duke of Gloucester and Edinburgh, and his new wife Princess Mary. The Duchess continued using the residence after her husband's death in 1834, and she died here too in 1857.

The house was demolished in 1904 following the Duke of Cambridge's death.