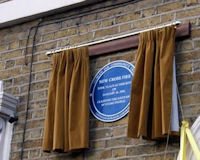 Description: This is where a terrible fire on the evening of Saturday 17th January 1981 caused 13 deaths.

There was heightened local racial tension at the time, the National Front were active, and policing tactics were contgroversial.

The house was the scene for a joint 16th birthday celebration for Yvonne Ruddock (one of the victims) and Angela Jackson (who survived). The victims were almost all black teenagers and 27 were injured.

Investigations led to the conclusion that the fire had started in the front living at 5.40am.

A week after the fire, a meeting at the Moonshot Club in New Cross, was attended by more than 1000 people and concluded with a march and demonstration on this spot.

The Action Committee organised a Black People's Day of Action on the 2nd March, when 20,000 people marched from Fordham Park to Hyde Park carrying placards that bore statements including: Thirteen Dead, Nothing Said. This became a rallying cry for political action.

A month after the fire, a fire in Dublin killed 48 young people in a club, and the Queen and PM Margaret Thatcher expressed their condolences.