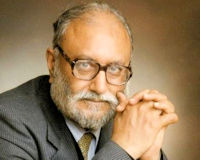 The first Pakistani to win a Nobel Prize lived here.

Description: The physicist Abdus Salam (19261996) is one of the greatest scientists of the 20th century - the first Pakistani to win a Nobel Prize and also the first Muslim to win one in the sciences. He lived here from buying this semi-detached house in 1957 until his death in 1996.

Born in Pakistan, with a scholarship from the Punjab government he was able to take up a place at St John's College, Cambridge in 1946. In 1952 he gained a PhD in theoretical physics and returned to Pakistan for 5 years but returned to the UK and he was appointed Professor of Applied Mathematics at Imperial College, London and bought this house here.

In 1968 he first presented the theory of how electromagnetic and weak forces could be considered manifestations of a single more fundamental force. He was awarded the Nobel Prize for Physics for this in 1979, alongside fellow researchers Sheldon Glashow and Steven Weinberg.

This work had at its centre a quest to explain the origins of the universe, paving the way for the discovery of the Higgs-Boson particle in 2012.