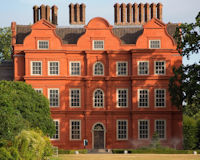 The home of George II and Queen Caroline.

Description: Kew Palace was originally built in 1631 as a fashionable mansion for the wealthy London silk merchant Samuel Fortrey.

George II (1727-60) and Queen Caroline thought of little Kew, as a perfect place for their three eldest daughters Anne, Amelia and Caroline. Several generations of Georgian royalty later all used Kew and nearby Richmond Lodge as a weekend refuge from the limelight of City life.

The house became a refuge for George III, when he fell ill through mental illness, and was thought to have become mad. In 1788, he became a concern to his physicians and he suffered powerful emetics, laxatives, freezing baths, leeching, and strait-jackets if he refused to co-operate. An increasingly desperate set of doctors tried to cure him.

Queen Charlotte planned a double wedding of her sons but was unable to make Windsor she they both tied the knot here in the drawing room on 11th July 1818.

Later in 1818, Queen Charlotte was taken ill on a journey from London to Windsor. She planned to stay at Kew Palace for a few days, but her health never improved and after a long illness for much of the year, she died in her bedroom here in November 1818.

Originally a large complex, few elements of it survive, mainly the Grade I listed Dutch House, which is open for visitors.