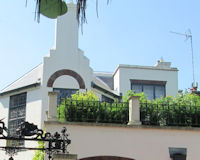 Description: Oliver! composer Lionel Bart (born Lionel Begleiter in 1930) lived here (once called St Dunstans Priory) from 1964 to 1968, at the height of his party years. In fact his name for it was the 'Fun Palace'.

Lionel Bart, the son of a Jewish East End tailor, had made millions from song-writing hit songs such as Little White Bull and Big Time.

He worked with Tommy Steele and discovered Cliff Richard, writing hit song Living Doll for him.

In the aftermath of the 1966 World Cup triumph, captain of the England team Bobby Moore and his wife were invited here. On their arrival, some familiar faces awaited including Joan Collins, Tom Jones, Jack Charlton and hundreds more.