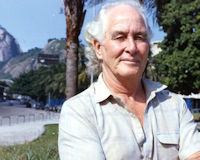 Description: Ronald Arthur Biggs (19292013), was born here on the 8th August 1929. The houses here demolished after the war are replaced by Landsdowne School.

Ronnie Biggs was a career criminal who helped plan and carry out the notorious 2.6m Great Train Robbery of 1963.

Among 12 caught and prosecuted in 1964, Ronnie then escaped from Wandsworth Prison in 1965, after serving just 1 year of his 30 year sentence.

To escape he had plastic surgery in Paris, before moving to Melbourne in Australia with his wife and children. They then fled to Brazil in 1969 and although being arrested by a Scotland Yard detective in Rio de Janeiro, he avoided extradition because he was father of a Brazilian child.