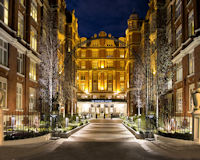 The hotel of spies and covert war operatives.

Description: This historic 4star hotel in Westminster is built on the site of a 15th century chapel dedicated to St. Ermin. By the late 19th century St. Ermin's Mansions were created here by E.T. Hall, converted into a hotel in 1899.

In 1940 Winston Churchill, held a historic meeting here with the founding members of the SOE (Special Operations Executive).

Tasked with at Setting Europe Ablaze, they carried out covert operations during World War II, from an entire floor of St. Ermin's Hotel. MI6 occupied the floor two floors above.

In the 1950's the spy Guy Burgess (part of the infamous Cambridge five) handed over secret papers to his Russian counterpart in the Caxton Bar. British agent Kim Philby had an office here.

Time to Honour and Respect», 0.8km