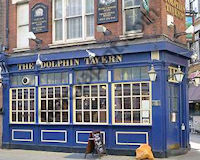 The pub whose clock is frozen at the time of a zeppelin raid.

Description: This old boozer was very badly damaged by the first ever silent but deadly zeppelin raid on London.

On the 8th September 1915 first explosive landed in Queen's Square minutes later the second landed here just outside the pub killing a man outside and two inside.

The zeppelin continued it's path of destruction bombing and killing on its way to a massive payload on Smithfield. By the time it had finished it had killed 22 people and injured 87.

The pub was rebuilt after the war and the old clock was discovered in the rubble, the time of the explosion showing as 10.40pm.

You can see the battered old red-backed clock if you visit today.