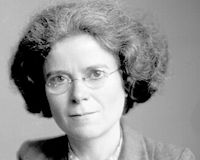 Description: Dame Kathleen Lonsdale (19031971) was the first female professor at UCL, University College London. She conducted pioneering research into the movement of atoms within crystals and was one of the first women to be appointed a member of the Royal Society.

After coming top in the University of London BSc list in 1922 she was invited to join the research team of Sir William H Bragg (founder of X-ray crystallography) at UCL.

Kathleen was born in Ireland but she lived in this house from the age of 8 in 1911 until she was 24 in 1927, and in January 2021 English Heritage added a blue plaque to the house stating KATHLEEN LONSDALE 19031971 Crystallographer and peace campaigner lived here in early life.

While living here through the air raids of the First World War, Lonsdale witnessed a Zeppelin being shot down in flames. Her mother cried Oh, the poor men, the poor men. When Lonsdale and her siblings contested that they were Germans, their mother replied, Yes, I know, but they are boys. She long questioned the moral justification of war after this and worked tirelessly as a peace campaigner for the remainder of her life.

The Man who knew everything», 10.km