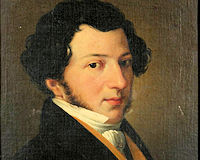 The composer of the William Tell Overture stayed here in London.

Description: When the famous Italian opera composer Rossini came to London on 13th December 1823 with his wife, he rented rooms here on the curve of Regent Street (then called 90 Quadrant).

The pedestrian section was colonnaded back then, it being just a few years old at that point and Rossini used to enjoy sitting upon the colonnade and watching the footfall of Londoners below.

A couple of days after their arrival they had a visit here from Count Lieven, the Russian ambassador, telling him that King George IV would gladly receive him at Court. Rossini was still recovering from the travelling and it took until the 29th December to visit George while he was in Brighton at the Pavillion. They went on to be close friends often performing together at recitals.