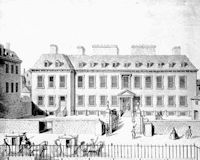 This is where Leicester House once stood, holding rival court.

Description: Leicester House was a large aristocratic townhouse just to the north of where Leicester Square is now. It was completed in 1635 by Robert Sidney, the 2nd Earl of Leicester and later occupied by Elizabeth Stuart, a former Queen of Bohemia, and by the Hanoverian Princess of Wales. She died in the house.

As the London residence of three successive princes, Leicester House also served as their political headquarters and became essentially a shadow court to rival the king's official court at St James's.

In 1672, Lady Sunderland, the wife of Robert Spencer (2nd Earl of Sunderland), Lord Leicester's grandson, gave a splendid dinner here attended by writer John Evelyn, who recalled that afterwards a fire-eater called Richardson entertained the company before us devour'd Brimston on glowing coales, chewing and swallowing them downe.

In 1791 the house was sold and redeveloped as numbers 715, Leicester Square (on its north side), and some new houses on Leicester Place, Leicester Street, Lisle Street, and Sidney Street (now Sidney Place).